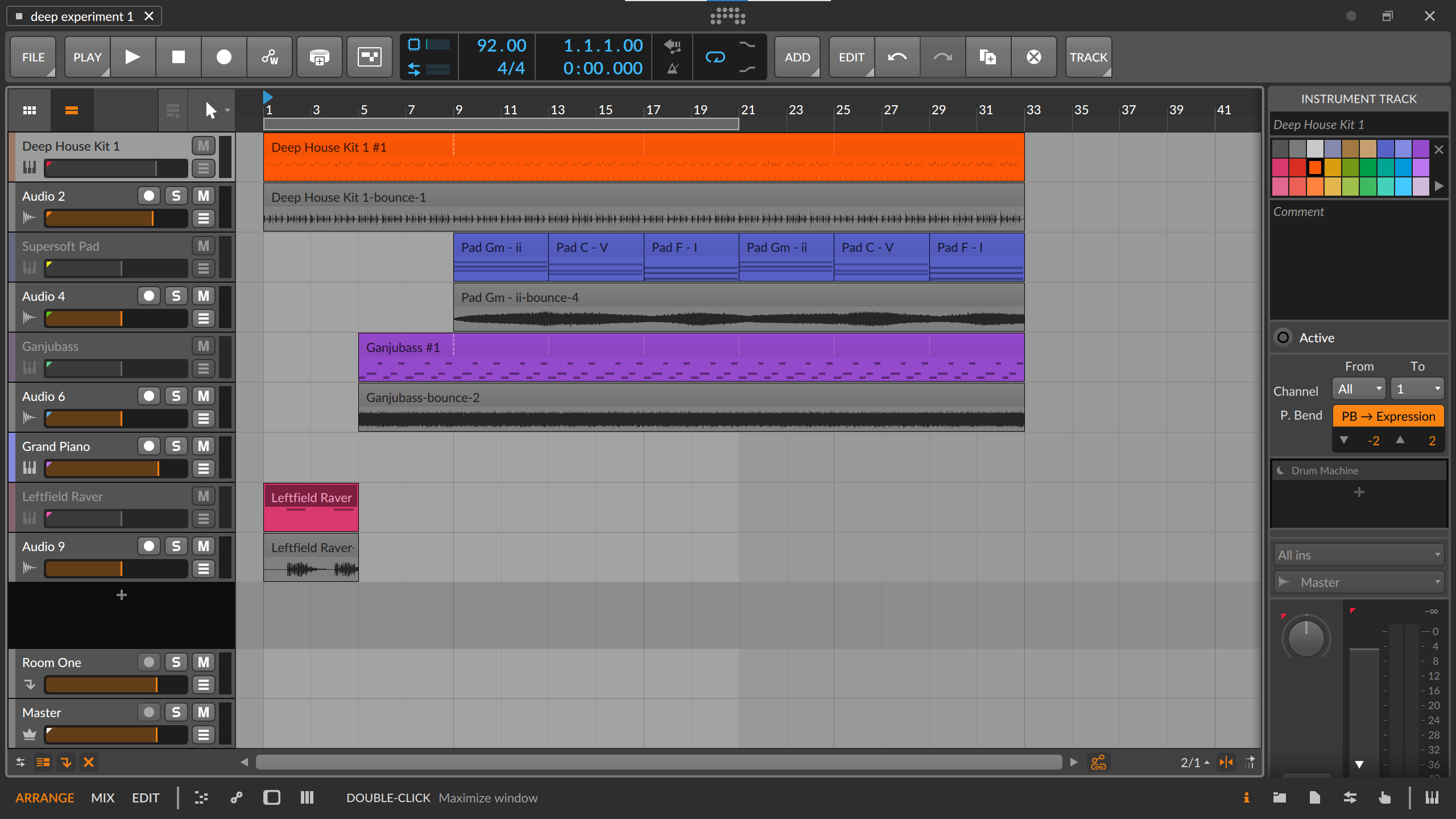 It started with the Deep House Kit #1 and some play on the Oxygen Pro 25's really nice drum pads. With "organic house" still top of mind—see creative accountability, organic house from about two weeks prior—I tested out the kit's percussion sounds and was pleased to hear some woodblock-sounding samples, and ended up tapping out a pattern that felt natural. I knew I was making some kind of deep house/organic house track, so I set the typical 4/4 kick pattern.

Next, came the arpeggiated-esque bassline—see creative accountability, aka clouds)—another thematic approach that's been top-of-mind. Constructing the instrument was the most intricate part—it's the "Ganjubass" Polysynth preset with Note Repeater and Quantize devices added to transform played notes into a repeating series of 1/16th notes (if I hold the F key for a bar, it will sound like I pressed F 16 times). The notes were just noodled out; they sounded neat together.

In the past, I've regularly been able to get this far in producing something, but I've rarely been able to go any further. Until recently, I haven't had the time or training to know what to try next. But my instinct was to try to layer in a pad sound; the wide, sweeping tones that create a lot of size and momentum in the deep house/organic house compositions that have been serving as inspiration.

My naive take: this is a tough step because pad sounds are pretty subtle—as far as I can tell, the instrumentation is usually somewhat understated. If I were to dive way in over my head with an orchestra analogy, it's more strings than brass, and it means that it's hard to pick an instrument. Here, I picked something called "Supersoft Pad" knowing that I wanted it to take its time, though I think it's more forward than I really intended. I imagine if this project were to continue, I'd end up putting it through a low-pass filter of some kind to make room for some kind of lead instrument.

Unfortunately, I really didn't know what to do with the chord progression itself. I've been watching a lot of introductory piano, basic music theory and composition YouTube videos, and recently stumbled into 2-5-1-land—so an extremely rudimentary version of that is what's here, in the key of F major. To its credit, it sounds "complete," but it's not at all interesting.

The "Leftfield Raver" stabs at the beginning were a short attempt to find a lead instrument. It seemed like a dead end, but my affection for the instrument itself led me to try an early dusting for flavor only. In retrospect, I think it's too noisy and similar to the bass instrument.