My kid learned that I've been trying to make music and has adorably been asking to hear the recordings. "Deep experiment" was one she liked, and upon learning that there were two versions—a creative stub, and then what I considered to be a more evolved version—she told me that the stub version was better, and my partner even agreed. So I returned to the stub version and tried to iterate from it in deep-experiment-1-2-2022-07-17-2346.mp3:

And here's a screenshot of Bitwig around the time of exporting the audio: 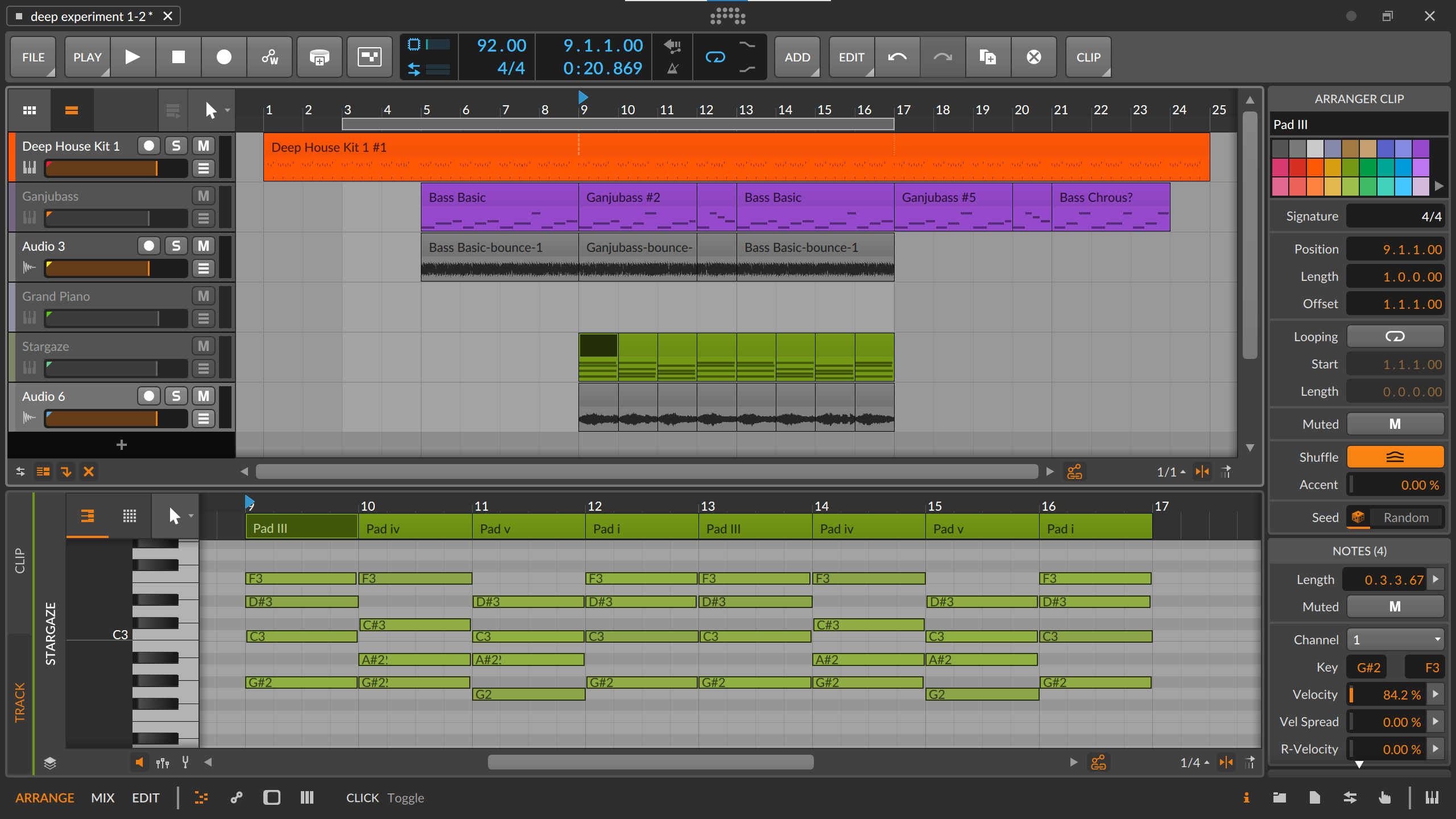 They preferred the bassline in the original deep experiment, so I returned to it. It was a sequence of F - G - C, and with that established, I figured I could try writing in F minor instead of F major. This time around, I did more homework—I wrote out all the notes of the scale and mapped out the scale's triad chords to give me a better map of what things to try. I wanted to evolve the bassline and ended up with more variation, mostly F - G - G# (darker!), with some F - G - C sprinkled in (dramatic!), and a fun F - F - D#- C# in the 8th bar. (I think of it like a little drum fill, but I suspect that's both (a) too soon for a drum fill and (b) not how other musicians think about their parts? Anyway...)

The chord progression and instrumentation in the first version of deep experiment was powerfully boring, and while folks in my family liked deep experiment 1 better, no one said that they liked the 2-5-1 pads, so that's where I started tinkering. The first chord progression I noodled out was a iv - v - VII - VI, and while I liked it, the scale mapping I wrote out made it more clear that this progression wasn't working alongside the bassline notes.

Attempting to work more with the basssline notes brought me to III - iv - v - i instead, which felt more stable. I did a lot of noodling to hear the chords in sequence, but my actual piano playing still sucks—so when the time came to record, I tracked the III chord, and then copied/adjusted the notes of the triad into new chords to make up the remainder of the progression. (Tracking the initial chord has the useful property of lending human unevenness to the played notes, so I still think it's better than simply drawing the notes into the chart.)

It sounded reasonable at this point, but I became much happier with it after playing with some inversions―with the intent of having the chord tones living closer to one another—and adding 7ths. But, I may have overdone it. While it did make for a more cohesive sound, it was also more flat and samey. (And I just noticed in reviewing the Bitwig screenshot that the manipulations I did on the i-chord ended up producing the same notes as the starting III-chord! No wonder it sounded same-y.) But now that I've done what feels like a stabilizing exercise to find out what musical ideas are at the core of this song, I think I'm in a good spot to revisit the composition to add more expression.